How to Use a Heatmap in SightLab VR Pro 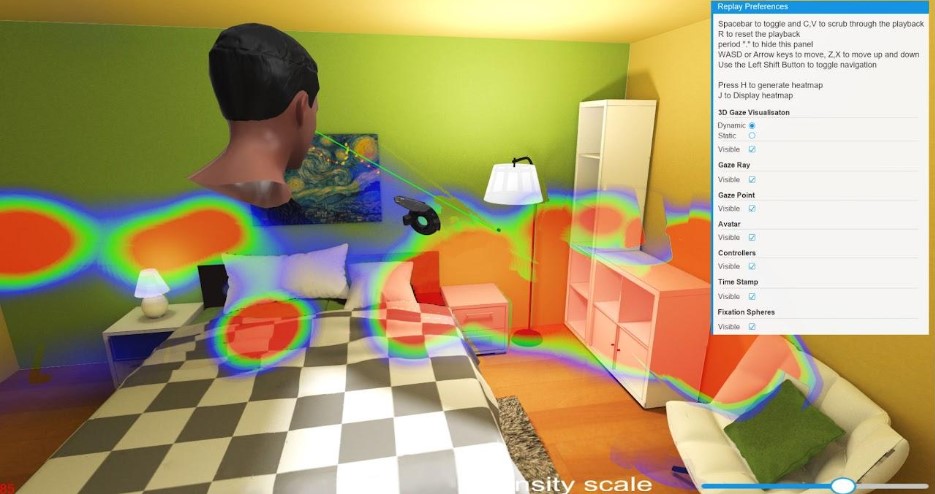 Heatmaps give unique insight into a user’s attention. Generally a heatmap shows the distribution of fixations that are close within a specific point in 3D space. Heatmaps are easy to generate for both 3D model scenes and 360 videos with Sightlab. Here are the instructions on how you can do this.

After running a session, run the "SessionReplay" file (or SessionReplay_360 for 360 video content). To generate the heatmap press the "H" key. This will generate a heatmap in first person view. After the heatmap is generated, press "J" to display a static heatmap and a slider will appear that lets you change the intensity.

By default the heatmap will need to be generated first, but you can go into the settings.py file and change HEATMAP_FLAG = 0 to HEATMAP_FLAG = 1 for the heatmap to generate alongside running the main SighLab experiment. The heatmap can change the look of some environments though (due to the shader being used).

HEATMAP_VISUAL_FLAG will allow you to see a live view of the heatmap while running an experiment.

Note: Heatmap only works currently for single user, and full integration is only available as of version 1.8. For more information see the SightLab VR documentation. To find out more about the experiment generator SightLab VR contact sales@worldviz.com