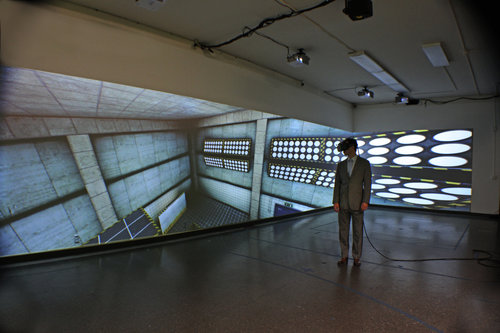 In the Virtual Reality world, the talk of the town right now is about Head-Mounted Displays (HMDs). HMDs – or some say 3D headsets – are fantastic for certain use cases, but technology developments have made 3D projection-based virtual reality systems incredibly affordable and easy to implement. While not getting lots of attention, this forgotten revolution is worth exploring for anyone interested in immersive technology.

First, though, a bit more about HMDs, their strengths – and their limitations, many of which highlight the strengths of VR projection systems. HMDs are uniquely capable of transporting users to different places and making people feel as if they are “right there” or even sharing the space with others. HMDs allow users to block out any perception of the real world and give a reasonably wide field of view that allows users to look through the HMD into the virtual world, similar to how a diver looks through a dive mask when exploring underwater realities.

There’s a big difference between the diver and the HMD user though. For one, the diver can still see her real hands and feet through the goggles, as well as the real world rocks, plants, or creatures that might be around them. The diver can move around accordingly. In HMDs, viewers are completely blocked out from the surrounding reality, unable to see their own real body, hands, feet, or the real-world obstacles around them.

So many of us who have tried VR have run into walls, poked furniture or our colleagues with Vive or Touch controllers, and generally looked a bit like buffoons to those who might be watching. So, the advantage of an HMD, its ability to fully immerse you and disconnect you from the real world, comes at a huge price – losing the contact with and reference frame of surrounding reality.

Projection Systems: The Best of Both Worlds

This is where VR projection systems shine. With projection, one person or a group of people can surround themselves with screens, and instead of wearing the screen in front of someone’s eyes with an HMD, everyone in the group can experience and share the viewpoint of the “viewer” in that group. So, an individual can interact just as they might in an HMD, but they can do so while seeing their arms, legs, and body. Additionally, a group can watch and be observers in a virtual interactive meeting while being fully immersed themselves. We’ve been getting enthusiastic feedback from our customers about our projection VR system (read about it here).

After years of working with industrial companies who are actually using VR, we think it’s inevitable: the future of VR will not only be HMDs, but a combination of HMDs, Projection VR, and probably even “old-fashioned” screen-based VR on 2D monitors.

And this is why the revolution in projection technology is relevant to the future of VR, despite being mostly overlooked right now. Traditional projection systems of days past used movie theater size projectors that cost a fortune, and in order to create a projection VR system, one had to sacrifice half a room to accommodate projectors, mirrors, and metal structures to generate a 3X3 meter VR walking space.

In recent years, though, projectors have become more lightweight, with bulbs changing from incandescent to laser, and DLP projection tech allowing the high frequencies needed for VR stereo projection. A new form factor for projections called “Ultra-Short-Throw” now lets you mount projectors on the ceiling and project directly on the walls of your conference rooms, not using up any precious real estate. The cherry on top? Prices have also dropped dramatically compared to the old movie-theater like projection systems.

All that’s needed is a corner of your room and you can create a multi-projector blended Projection VR system. With such a system, a VR experience or VR collaboration session is possible without wearing an HMD. In a corporate setting, this is a much more elegant solution than all users having to wear HMDs.

The Future of VR: It’s All Coming Together

So, our prediction is that the rise of VR for corporate use cases combined with the overlooked revolution in 3D projection technology will lead to a growth in projection VR solutions that augment HMD-based VR experiences. Combined with traditional screen-based 3D experiences, this makes for a perfect storm that will help VR come to life in the workspace, in classrooms, and in the enterprise market.

Want to learn more about our Projection VR systems? Check out this page to get more in depth. WorldViz makes a line of products that integrates all modalities of VR into system solutions for enterprises – walking VR, projection VR, HMDs, and VR on traditional screens.

Contact us for more details or if you have any questions.