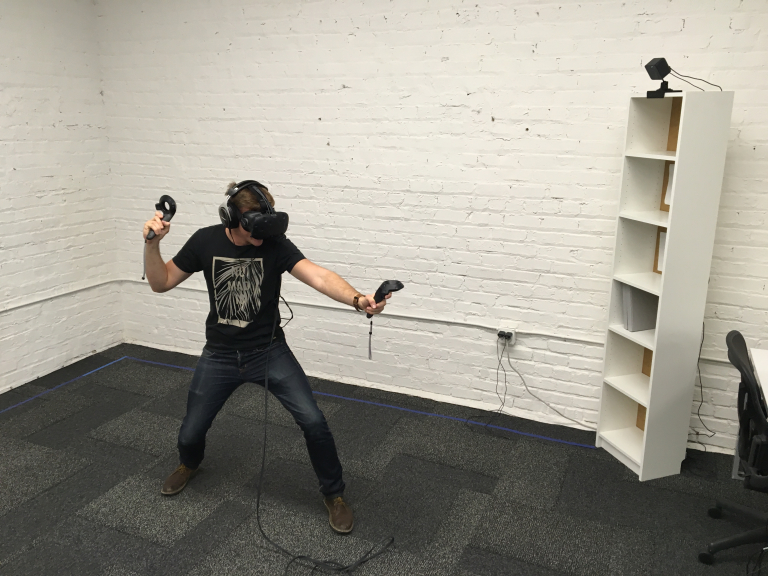 I met with Foo Hoang, Senior UX Designer, last Friday at the HTC office in San Francisco. Foo showed me some of the exciting new VR content exclusive to the Vive. I asked him how he got into VR and why he chose to work on the Vive.

Foo said “I started at HTC before the start of the smartphone revolution. Here I am at another precipice, helping to bring virtual reality to the mainstream. With that comes the need to make interaction models that take advantage of the full space around the user, yet making it familiar and simple to understand. While it has been a challenging task, it has been exciting diving into this new world that WorldViz has been very much a part of and really being able to expand my understanding of the interaction that has been previously limited to a two dimensional screen. I’m really excited to see where this next phase of VR goes.”

I had the opportunity to try several games including Valve’s Aperture Robot Repair Demo based on the game Portal. In case you’re unfamiliar, Portal is a puzzle based game that takes place inside a futuristic factory where robots try to kill you.  I was most excited to see how game developers were using room-scale VR as a story telling medium.

Valve’s demo did not disappoint. In my opinion, the highlight of the demo came early on when I was instructed to open a series of 3 drawers. Upon opening the last drawer, I discovered a “mini-universe”. Around 24 animated human stick figures sitting inside tiny office cubicles looked up at me and started to panic. Each stick figure was individually animated. Thanks to the room-scale tracking, I was able to lean over and see into individual cubicles and watch as the tiny stick figures cowered in fear because they thought I was their “God”.

This “mini-universe” scene stuck out to me because it’s something I would have easily over looked in a traditional 2D video game. Room-scale VR allows users to look closely at any part of the game they choose and fully immerses the user in the story. Every part of the game environment comes to life.

The HTC Vive is fully compatible with Vizard 5.3.