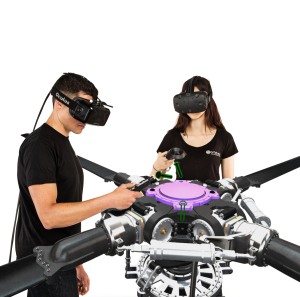 The WorldViz team had an amazing time at this year’s GTC! We showed some of our co-presence demos,  featuring an Oculus Rift and HTC Vive interacting in the same virtual world. In one demo, users worked together to assemble a helicopter motor. In another, users participated in an architectural design walkthrough. All of WorldViz’s VR application were powered by Lenovo’s new “VR Ready ThinkStation“.  Lenovo’s ThinkStation P500, P710 and P910 and its NVIDIA Quadro-recommended configurations are best-in-class for the ultimate highest-performing VR experience.

The benefits of WorldViz’s professional VR solutions, coupled with the power and reliability of a Lenovo workstation, will bring professionals in more industries unprecedented performance to bring their workflow into a virtual environment. There are no limits to how virtual reality is changing the future of many professional industries.