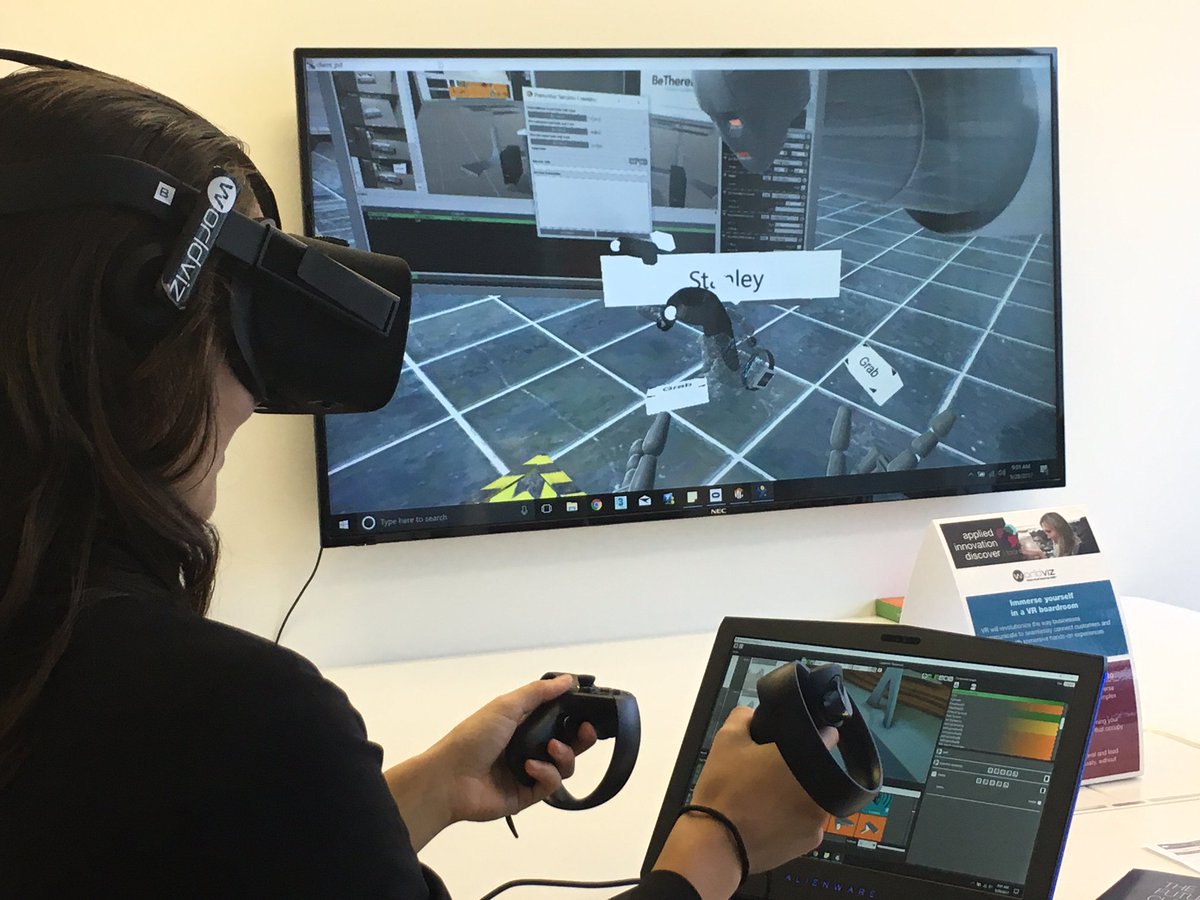 Nov 15, 2016 – Santa Barbara, CA – WorldViz, an industry-leading provider of virtual reality (VR) solutions for the enterprise and public sectors, announced today that it is working on a new communication platform, codenamed “Skofield”. Currently in alpha, Skofield will bring VR to businesses looking for new, cost-effective and more immersive methods for communicating complex ideas to remote decision makers and disbursed teams. The alpha version of Skofield will be on display in the “Lenovo Virtual Reality Interactive Zone” at Autodesk University (Nov 15-17, Las Vegas Venetian Hotel).

“Accurately conveying visual ideas to remote decision makers is still a huge challenge for companies,” said WorldViz CEO and co-founder, Andrew Beall. “We see it all the time – modern communication technologies such as telephony, video conference calls, and PowerPoint sharing simply can’t bring people together in a collaborative setting or enable decision makers to experience complex concepts, designs, and spaces first hand. Companies are spending a staggering $1.25 trillion globally on business travel to circumvent this limitation. We believe Skofield is the answer to that challenge.”

Skofield operates much like a GoToMeeting for VR and takes advantage of VR’s ability to make someone feel “present” in a virtual location, drastically diminishing the need for teams to travel to a physical location to present, review or interact with visual content. This is incredibly important for businesses engaged in the creation of highly complex and costly products, such as aerospace, automotive, construction, architecture and more, where getting the design right from the outset can save millions of dollars.

Skofield has two main elements to it: creation and experience. In the creation phase, presenters use Skofield’s Presentation Designer software to quickly put together a VR presentation by dragging and dropping elements into the WYSIWYG editor. The Presentation Designer will also allow the presenter to modify the presentation by setting proximity triggers, defining which objects have interactivity, and much more. In addition to creating virtual spaces and interactive objects, presenters can also insert PDFs and PPT slides, such as training manuals or product fact sheets, to support a presentation.

Once they’ve created a presentation, the presenter can then invite attendees to join a session immediately or at a later date via email or text. Attendees can then view, experience, and interact with the VR presentation or 3D designs without ever having to travel. A set of tools will give attendees the ability to interact with the presentation in different ways, such as move around the virtual space, zoom in on or interact with objects, annotate on objects, measure distances, or even use a virtual laser pointer. Skofield also provides telephony for voice as well as gaze tracking, and can even record meetings for later reference.

Since Skofield is built on WorldViz’s device-agnostic development software, Vizard, it will support a number of different VR hardware configurations using Vizard’s built-in feature, VizConnect. Initially Oculus Rift and HTC Vive will be supported, as well as the current 3D displays, CAVE projection systems, input devices, and mobile devices WorldViz already supports. Other headsets will be added over time depending on demand.

Skofield will be available as a cloud-based (SaaS) solution, but can also be set up on a company’s existing servers for highly sensitive environments. Pricing for Skofield will be announced at a later date.

As WorldViz progresses toward launch, it is kicking off a beta testing program today where any company can register to become an early user of Skofield. The program is designed to give companies early access to the technology, and for WorldViz to capture feedback from potential customers prior to the final phase of development.